Looking around my apartment, there are three separate stacks of books, all with more than five books themselves, waiting for me to read them. There is also a Kindle loaded up with yummy novels, and across the street there is a library chalk-full of books I want to read (and across the other street there is a book store, and two blocks away there is another book store…) I have a lot to read–that I’m looking forward to read–and I also have two internships plus my own writing and blog and fun times to be had, so that means squeezing books in when I can. With so many new narratives waiting for me to discover them, I really don’t have time to reread the books I like.

And yet, I spent the past few days hunting down in the library (okay, it wasn’t that hard since it’s across the street) for the second time all the books in the Molly Murphy Mysteries and rereading them. And loving it. And liking some of them more the second time around than the first time I read them.

I was feeling guilty about this until a friend posted that the Journal of Consumer Research has scientifically concluded that it is good for you to reread books. The study reveals that because the second (or third, or fourth, or fifth) time around you don’t need to be paying attention to the plot,  you can really savor the emotional turns of the story. And allowing us to access and explore our emotions through other people’s stories is one of the reasons reading fiction is fun and good for us. In fact, I primarily consume narratives for their emotions. Sure, I appreciate a well-laid plot or interesting ideas, but what I’m interested in–always–is how the characters are feeling, how they react to each other, and how they are feeling after whatever happened. 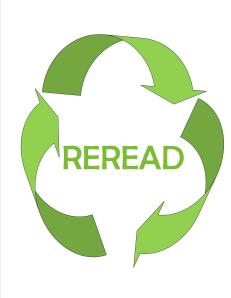 This, I suspect, is something that differentiates some hardcore genre fiction from general fiction. For example, romance readers are known for being some of the biggest buyers in the industry because they read so many books a week, but how many of them are re-reading? I love me a romance, but I don’t think I’ve ever revisited one, and I think there are two reasons for that. First, the emotional layer of the story is presented up front. That’s the whole thesis of the genre: to tell an emotional story. Rereading doesn’t often uncover any hidden gems except, perhaps, for plot twists you didn’t notice the first time around because you were so busy paying attention to the emotion. Second, romance novels follow a formula that is pretty heavily enforced by writers and publishers alike. I don’t know the specifics, but it’s along the lines of boy meets girl by page 10; boy and girl have a fight by page 100; boy and girl make up by end. So if you want to repeat the emotional journey you just read, rather than return to a story you already know, you can move on to the next romance novel.

On the reverse side of things, I also don’t think very many mysteries are re-read–except to figure out how the author put that plot together. Mysteries are more about puzzle than about emotion, and while most have some sort of friendship or romantic subplot to provide emotion to the story, a lot of times that subplot is very dry. I love mysteries, but I can think of so many where I didn’t buy the emotional aspect or where it was basically man uses woman as someone to lean on for a night and then goes and gets the bad guy and feels a little guilty but hey, that’s the way he is. (Or woman uses man, or any variation in between.) So rereading these narratives doesn’t uncover much because there really isn’t much there. (The mysteries I reread, like Molly Murphy or the PJ Tracy Monkeewrench books, are series in which there is a running emotional thread, and maybe every thirty pages or so there is a yummy morsel that I didn’t have time to savor in the first read-through but that I can in the second. I do, sometimes, have to read between the lines and create my own version of the emotional plots to be satisfied.)

So as a writer, whether of these genres or not, if we want our readers to return to our stories, we must make sure there is complexity enough that there will be something there the second time around. I don’t think is something that needs to be specifically planned out with charts or index cards or anything (although that couldn’t hurt); I believe complexity simply comes from sitting with the project, from really thinking about it and turning it through many angles until it shines, from giving the narrative room to grow past its original seed. It means rewriting, and letting the story marinate between revisions, and making sure every word counts. If you can still return to the story after ten rewrites and find something that makes you love it, then certainly your readers will want to return to it for a second, third, or fourth perusal.

PS Andrea Hurst, my first mentor in the publishing business, has published her novel, The Guestbook!

Fleeing her picture-perfect life among the privileged set and the wreckage of a failed marriage, Lily Parkins moves to the only place that still holds happy memories: her grandmother’s farmhouse, now a converted B&B on the enchanting Madrona Island. After learning her grandmother has passed away, Lily is left with only an old guestbook as her guide—a curious book full of letters, recipes, and glimpses into her family history. She is determined to embrace her newfound independence and recreate herself, one page at a time. With the help of quirky island residents, she finds the strength to follow her passion and culinary dreams. But as soon as she has sworn off men and is standing on her own two feet, Lily meets Ian, the alluring artist who lives next door, and her new life is suddenly thrown off course. The last thing she wants to do right now is fall in love. Ultimately, Lily must decide if it’s worth giving up her soul for security or risk everything to follow her heart.