In earlier posts I have talked about the line between making romance plots tantalizing and drawing them out. In particular, I mentioned the television show Bones, where from the pilot episode it is clear Booth and Bones belong together, yet in season 6 they remained apart. [Spoiler alert] Well, that’s over now. In the second-to-last episode of the season, Bones stays over at Booth’s apartment because his enemy is hunting his allies, and, as she tells her best friend Angela later, she “climbs into Booth’s bed.” Angela asks what that means, and Bones simply gives us a knowing smile. In the next episode, the issue remains undiscussed, although there are hints that Bones’s and Booth’s relationship has changed from the smiles they exchange, until the very end, when Bones drops the bombshell: she’s pregnant, and Booth is the father. 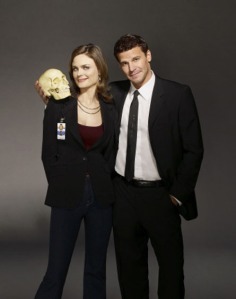 At face value, I’m just relieved Booth and Bones have finally ended up together. It’s been a long time coming. But this is not the resolution that fans have been waiting for. We are only told they have finally moved their relationship from friendship to romantic; what they show us is simply Bones crying into Booth’s arms, something she has done before with less satisfactory results. Afterwards, we see no reactions, no turmoil, no emotions: Booth and Bones are carrying on as if nothing has happened, when in all the build up for the past few seasons we know they both would view this as something huge. This is not just some one night stand: it is a partnership and friendship that is changed forever. Why don’t the writers let us see the change?

One answer, probably the one the writers themselves would give, is that they are prolonging the suspense so that we are wondering whether or not anything actually happened or anything has changed so that then they can surprise us with the surprising ending of Bones’s pregnancy. I am unconvinced. If this is really what the writers intended, it seems like trickery to me, a weak technique for lazy writers who would rather use soap-opera-worthy devices such as surprise pregnancies rather than really investigate the relationship between Bones and Booth. I suspect that in fact the writers are not lazy, but afraid; they know that the change in the relationship will change the dynamics of the show, and might even lead to the show’s demise. But it does not have to negatively affect the show. If the writers will take chances, if the writers will actually confront the problems they have created instead of avoid them or prolong them, then perhaps this show could actually feel honest, authentic, and great.

It is inevitable that a writer will find herself confronted with a problem in plot, character, or setting that seems easier to ignore than to confront. But problems exist in real life, and if you can’t revise (as television shows can’t), using those problems instead of fleeing them will might just result in a deeper, richer story.