Looking around my apartment, there are three separate stacks of books, all with more than five books themselves, waiting for me to read them. There is also a Kindle loaded up with yummy novels, and across the street there is a library chalk-full of books I want to read (and across the other street there is a book store, and two blocks away there is another book store…) I have a lot to read–that I’m looking forward to read–and I also have two internships plus my own writing and blog and fun times to be had, so that means squeezing books in when I can. With so many new narratives waiting for me to discover them, I really don’t have time to reread the books I like.

And yet, I spent the past few days hunting down in the library (okay, it wasn’t that hard since it’s across the street) for the second time all the books in the Molly Murphy Mysteries and rereading them. And loving it. And liking some of them more the second time around than the first time I read them.

I was feeling guilty about this until a friend posted that the Journal of Consumer Research has scientifically concluded that it is good for you to reread books.  END_OF_DOCUMENT_TOKEN_TO_BE_REPLACED

I just got back from a quick trip to New York to meet the agency I’m interning with and other such fun things. I had quite the adventure, including going the wrong way on the subway at midnight, walking on a fence instead of the sidewalk to avoid swamping my feet, and a horrible (and I mean horrible) waiter.

One of the highlights of my trip was strolling down tenth street and accidentally finding Patchin Place. I don’t know if I’ve mentioned it here, but I’m kind of obsessed with this historical mystery series by Rhys Bowen called the Molly Murphy Mysteries. Molly Murphy is a spunky Irish immigrant in New York in the early 1900s who for one reason or another always finds herself solving mysteries. In Book 2, she moves to Patchin Place, which I vaguely knew was in the Village but which I also assumed was fictional. But it exists! I took pictures to prove it! 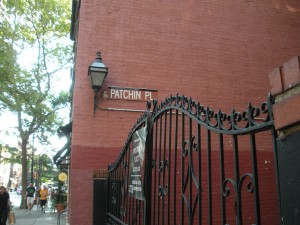 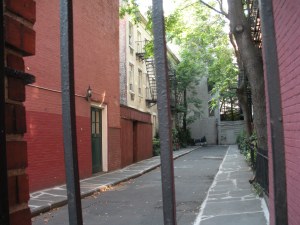 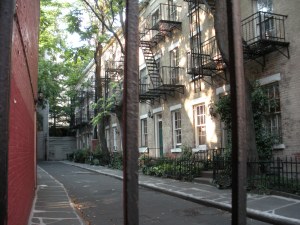 Another really cool thing I got to do was attend a panel on publishing featuring four big-wig editors from Random House, Hachette, and Harper Collins. They told us about how they got into publishing, what they looked for in agents that they work with, and gave some advice for job-searching. Most of the information I’d heard before, but it was different to actually see and hear the person who was saying it. But what was most interesting that three of the four editors, who are editors-in-chief or run their own imprints or other impressive editorial things, started off not as editors. One started out as an assistant to an editor-in-chief, who he said used to make him do things like take her cat to the vet, so I immediately started picturing the Sandra Bullock-Ryan Reynolds situation in The Proposal. Another started in the promotions department and told everyone who she worked with that she actually wanted to be an editor until she was finally made an editor. Another befriended the current editor so that she could take the job when the editor left.

So on the one hand, that probably means it’s going to be tough for me to break in as an editor. But since I already knew that, what the talk really left me with was this: editors at the big publishing houses really want to be editors. They go to all sorts of lengths to get their jobs. This is what they are passionate about; this is their dream job. As an author, that is good news. That means that the editor working on your book isn’t doing it for any reason other than that they love it and they believe in it. Could there be a better reason?